Being someone that has always wanted to start their own animation company I have always had a respect for those entrepreneurs that have already done it.  There is of course Walt Disney, but there is also the less known people such as Will Vinton.  I learned about Will and his studio a few months ago, and was surprised I never heard of him before.  Starting your own company there are so many decisions that you have to make on a daily basis, and any of those decisions could be the one that causes your company to fail.  Will made a wrong decisions that cost him his studio.  Will Vinton is credited with coming up with the term “Claymation”, and was even trademarked by him.  He won an Oscar, and several Emmy Awards for the work that his studio did.  Even if you don’t know him you might know his work.  His company Will Vinton Studios made many classic claymation feature films, TV series, TV specials, and short films. His commercial work is what I remember the most, and it includes the California Raisins, the Domino’s Pizza Noid, and the M&M’s Red, Yellow, and Green characters.  Will’s company was doing really well, and taking on many more projects.  Many felt his studio was growing to fast, and that is how he lost control of it.  By the end of the 1990’s the studio was seeking funds for more feature films.  One of the key investors was Phil Knight, the owner of the shoe company Nike, Inc..  Part of the deal for Knight to invest more was that he would require a larger stake in the company.  He also got his son Travis a job at the company as an animator.  Travis previously had a failed career as a rapper under the name Chilly Tee.  You might be thinking I’m getting off subject, but this is where things went wrong.  In 2002, Will Vinton ended up losing control of Vinton Studios when Phil Knight became the majority shareholder in the company.  Eventually they decided that Will was no longer needed, and he was fired from the company he started.  Phil Knight ended up putting his son Travis in charge of the company, and the company was later renamed to Laika. You may know Laika for their feature films Coraline, & ParaNorman.  This story sounds very similar to the story of Steve Jobs with Apple computers, but the difference is Steve was able to come back and retake over his company. When I read about this a couple of months ago there was no happy return for Mr. Vinton, but I read an article this morning about how he is trying to make a comeback.  His new company Vinton Entertainment announced a co-production deal with Gnosis Moving Pictures for a series of animated features directed by Vinton.  You can learn more about these projects check out this article, but this is not the focus of my post.

Maybe this will prove to be successful for Will Vinton, and maybe not.  The important thing is that even though he had fallen down, he was able to rise from his failure to try again.  This and many other stories are things that I try and learn about, so that I can hopefully not make the same mistakes.  One of my biggest fears is to pour my heart and soul into this company of mine only to have it fail.  I know there is a lot I still don’t know, and these last 2 weeks I have learned a great deal.  I will continue to learn from my own mistakes as well as mistakes made by others.  This can be very scary realizing I’m flying blindly, and if I knew yesterday what I know today, maybe I would not have made the same decision that I made yesterday. This reminds me of one of the things Steve Jobs said during his Stanford commencement speech.

“You can’t connect the dots looking forward; you can only connect them looking backwards. So you have to trust that the dots will somehow connect in your future. You have to trust in something – your gut, destiny, life, karma, whatever. Because believing that the dots will connect down the road will give you the confidence to follow your heart even when it leads you off the well worn path; and that will make all the difference.”

So even though I might make some wrong decisions I have to believe it will all work out in the end. In high school I was a pole vaulter on the track and field team.  Holding the end of a 12 foot pole, running as fast as you can, planting the pole in a box that made the pole to bend, and shooting you high into the air taught me a valuable lesson that I feel applies to this adventure of mine.  Pole-vaulting can be very dangerous, but you have to run into it with full confidence, because any hesitation or doubt will slow you down and not give you the speed you need to get you up and into the mat.  The times I second guessed what I was doing I would get shot up and backwards into the air away from the soft pole-vault mat, and onto the hard track.  Whenever that happened we had a rule that without a moment to think about it you had to try again.  If you let yourself think about that fall it would shake your confidence, and once you lose your confidence it was much harder to get it back.  After every fall you had to get up and try it again. 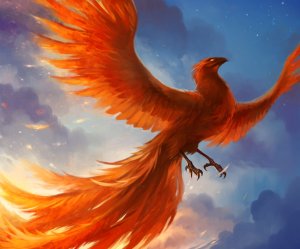 The Phoenix is a mystical bird that every 500 years(depending on the version) would consume itself in its own flames only to be reborn from the ashes.  I have always loved the story of the phoenix and its rebirth, and have always used it as a source of inspiration and motivation.  In a way I have always thought of the Phoenix as my Spirit Guide.  No matter how many times I might fail I will always pick myself up, dust off the ashes, and try again with a renewed energy, and a greater knowledge from my previous mistakes. As the saying says “What does not kill me makes me stronger”. Believing in this gives me the confidence to go after my dreams regardless of how “dangerous” it might seem.  As Steve Jobs and now Will Vinton have done, they had risen from the ashes of their failures, and were symbolically reborn to try again. There are countless of stories in the business world of people being reborn to come back from failure.  I know I don’t want to fail, but I can’t let the fear of failure shake my confidence.  If I do fail I will look to the Phoenix and rise out of the ashes to start again.  I hope that any of you that has or will have setbacks will have the courage and strength to rise again to make your dreams come true.

Please share in the comments any other stories of rebirth that you personally have had, or that you have heard about.