Have you ever thought about how much life can be like a strategy game?  You are constantly faced with choices that require you to make a move.  Sometimes a move is just a move, but sometimes a move can determine a victory or game over.  What you don’t want to do is just react to what happens in the game, but instead have a strategy.  Sometimes luck is on your side and it moves you forward two spaces, and sometimes it is against you and you have to skip a turn.  If you are only reacting to what happens you are at the will of the roll of the dice or the hand you are given.  When you have a strategy you can better withstand the obstacles that the game throws at you.  You can’t win the game purely on luck, since you luck will eventually run out. 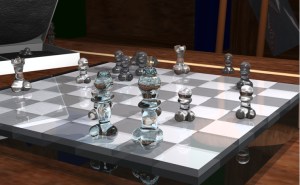 I remember learning how to play Chess when I was younger, and how much I instantly loved it.  At first I had no idea what I was doing, and what each piece could do, or not do.  This could be like your early years in life when you are learning how to walk and talk.  In Chess there are very clear rules, but in life there are no clearly defined rules to play the game.  You are left to figure them out on your own.  You try and learn as much as you can from experienced players like your parents, but in reality they are also trying to figure out the rules of the game.  Of all the games you will ever play, life will be the most challenging, but will also be the most rewarding one to succeed at.

Tutorial
You will eventually get to a point after you have read the rule book a million times, and you just have to play a practice round to understand the game.  Unfortunately in life you don’t get this practice round, but fortunately your moves are limited at this stage by your parents to keep you from making really bad moves.

Early Game
Once you begin to understand the basics of the game you are ready to start learning the strategy of the game.  In Chess I could eventually look at the board and play out in my head different scenarios that could happen.  I would always try to be 3 to 4 moves ahead.  I would think to myself, “if they moved here I would do this, but if they moved there I would have to do that”.  It was a combination of having an overall plan of where you wanted to go, but being able to adapt your strategy based on their unpredictable moves.  This is key in being able to get a head later in the game.  You have to have a road map, and a plan for detours that you might have to take.  For anyone who has ever played any of the Civilization games this is when you are setting up your empire.  Deciding where to put your cities, and sending out scout unites to explore your land.  Although it won’t be that evident at this point what you do in early game can have a huge impact on the rest of the game.  If you mess up at this stage it does not mean you will be sure to lose, but it will make it more difficult for you to pull ahead.

Mid Game
In the early game everyone is at an equal playing field, but by the time you get to this stage you start to see some players pulling ahead while others start to fall behind.  There could be many reasons for your position at this point, and it could be your strategy, or it could be your luck.  No matter what the reason that landed you in your current ranking it will be good strategy that will either keep you ahead, or help you pull ahead.  It is at this point in the game the momentum really starts to pick up.  What happens at this stage of the game will determine the outcome of the game.  In the game CashFlow this is where you are trying to get out of the rat race. Some players will get out, but some will never get out.

End Game
You are in the home stretch, and victory is within your grasp.  You are finally out of the rat race, you have your enemies last city surrounded by your military units, or you are chasing down their lone king.  The chances of failing are still possible, but highly unlikely.

“How dreadful…to be caught up in a game and have no idea of the rules.” ― Caroline Stevermer, Sorcery & Cecelia: or The Enchanted Chocolate Pot

In real life how to play the game and how to win are not always clear, and often is different for each person. There can also be mini-games within the game, and those mini-games can effect the overall game.  There are different ways to win, and you get to decide which victory rules you want to follow.  You can compete against others, or you can simply compete against your past self.   It is actually up to you if you already won or not.  Your victory condition could be to help others win, and by helping them win makes you win.  That is the interesting part about the game of life, it is what you make of it.  Time is both your alley, and your enemy.  Time will earn you experience points, but in the end time will eventually kill you.  To make the game even more difficult… you only get one life.  This game is not always a fun one to play, and that is just a part of the game.  If you are lucky the game is a long one, and you learn how to enjoy it.  The high difficulty level is what keeps the game exciting. I really enjoy playing games, and of course strategy games are my favorite. Some of my favorites are Civilization, CashFlow, Settlers of Catan, and Chess.  I love that feeling when your strategy first starts showing that it is working, and you start to build up momentum moving ahead.  I also realize how much time some of these strategy games can take.  For example a game of Civilization can easily take weeks to finish depending on how much time you can dedicate to it.  As much fun as they are I decided I wanted to focus my time on the game of life.  It is a much slower pace, and it takes a lot longer to realize if your strategy is working or not.  With that the successes are much more rewarding, and it is filled with mini-games that keeps things interesting.  I look at starting my own company as a mini-game, and right now I’m at the stage where I’m learning the rules.  Once I understand the game I can start refining my strategies, and setting my victory conditions.  I realize that like all the other strategy games I have played it will start out slow while I begin to implement my strategies, but if the plans are good they will begin to get traction.  I feel I have already had a lot of great luck, and good strategy as a backbone to keep my traction.  You have to keep moving forward one space at a time.  At the end of the day, the most important thing is to enjoy the game.