Last week I attended The World Animation and VFX Summit which was held at the California Yacht Club in Marina del Rey.  While it was my first time attending it was actually the 4th year the summit has been held.

I have been to a few different conferences now, and I found this one to be very interesting.  The reason I found it to be interesting was because its attendees were mostly producers, executives, and/or founders of animation companies, so all the discussions were geared towards topics I was interested in.  Most events I find are either for artists in animation, or producers in live action films, but not producers for animation.

This was a 3 day event, but I only attended the first two days.  The 3rd day was only classes, and I choose to start small this year to see if it was worth it.  It was a much smaller conference then I have attended and you did not have to choose which panel to attend since only one was going on at a time.  This was great, since you never felt like you were missing something, and you got to know the other attendees a lot better.

They had some really great panels through each day such as “The New Reality of… New Virtual Reality Revolution”, Animated Movie Spotlight: The Peanuts Movie”, “The Business of Show Business”, “Understanding the New Hybrid Studio Model”, “Understanding the Evolving Ecosystem of Global Feature Co-Productions”, “Building Your Company and Your Brand”, “Charting the Future of the Small Screen”, and others.

For breakfast and lunch each day you could sign up to eat with one of the panelists which was a great chance to talk and ask them questions you might not have asked in front of the group.

At the end of each day they had a cocktail party which gave us all another chance to meet and network with each other. I was surprised by how many people there were from all over the world.  I met people from Russia, South Africa, China, Malaysia, and all over South America to name a few.  Many of them looking for co-productions deals with US production companies. 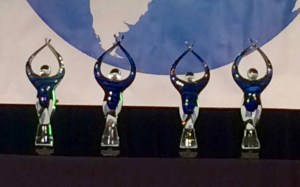 On Monday after the cocktail party they had the Awards Gala where they gave out 4 awards.  They were The Trailblazer of the Year Award, The Lifetime Achievement Award, The Creative Visionary Award, and Breakout Studio Award.

The Master of the Ceremonies was Candi Milo who did the voices for Dexter from Dexter’s Laboratory, Sweetie Bird from Tiny Toon Adventures, and many other characters over the years.

It was entertaining to see Danny Jacobs (voice of King Julian) present the award for Trailblazer of the Year to Head of Television for DreamWorks Animation Margie Cohn.  I recorded a quick clip of it which I included below.

The Creative Visionary award went to Charles Schulz who created the comix strip Peanuts. The award was presented to Schulz’s daughter Jill Schulz by the director of The Peanuts Movie.  While at the cocktail party before the awards I was talking to Charles Schulz granddaughter.   I was a little shocked when she mentioned who she was, and I did not know what to say.  I responded something stupid along the lines of “I’m sure you liked your grandfather”.

Besides that moment of awkwardness it was a really great event, and I’m glad I had the opportunity to attend.  I hope to attend again next year. To read more about the Awards Gala check out the Animation Magazine article.