This weekend was the Producers Guild of America’s annual Produced by Conference.  This is a conference for producers, and has a lot of really great panels, mentoring, and networking opportunities for members of the guild.  This was my second time going to the conference, and I wanted to share my experience with all of you.  If you are interested in reading about last year’s conference you can do it here. 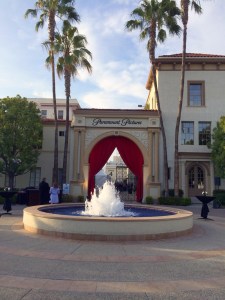 Last year’s conference was held at Warner Bros. Studios, but this year’s was held at Paramount Pictures.  It was nice to get back on the Paramount lot, and it reminded me of when I worked at DreamWorks Studios(DWS).  At the time DWS was owned by Paramount, so I had my new hire orientation on the Paramount lot.  They also had free weekly movie screenings at the huge 500+ seat theatre that I often took advantage of since I never had the money to pay for movies.

The conference opened on Friday night with a general meeting for the members followed by a really nice Hollywood style party.  The meeting was interesting, but of course it went longer then expected.  They had every committee get up and talk about what their committees where about, and what they were working on.  I think they could have done abbreviated updates instead of each of them taking 10-15 minutes each.  I also did not eat dinner, so I was ready to get out to the party.  When we finally got out of the meeting, and to the party I spent the first half hour just stuffing my face with all the delicious foods they had.

The sessions that I went to on Sunday were “The art and craft of pitching for television”, “Conversations with: Kevin Smith”, “Creating Meaningful Brand Partnerships to enhance your content”, and “Everything you wanted to know about games, but were afraid to ask”.

The pitching for TV was very interesting, and entertaining.  They had a panel of executives, and 5 producer/writers that took turns pitching their ideas to the executives.  The executives had fun with it, and did things like interrupt them, walk away, talk to people during the pitch, and so on.  The goal was to show you what you might expect to see when pitching to these executives, and how to keep your cool during your pitch.  After each pitch they would give pointers at how to make their pitch stronger.  It actually was very educational.  It was neat to see what worked, and what did not work.  It gave me a lot of great insight on ways to improve my pitches. 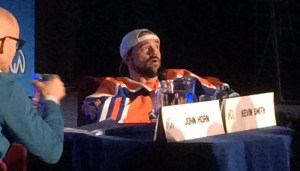 I signed up for the session with Kevin Smith more for the fun of it.  If you don’t know who he is he is the director/writer for movies “Clerks”, “Jay and Silent Bob”, and “Dogma”.  They had John Horn as the moderator, but I don’t think he got a word in after they started.  Kevin just talked about one story after another, and barely stopped to take a breath.  It was a fun time, and I think I laughed through the entire session.

The session on creating brand partnerships was interesting, but I was expecting something different.  When I signed up for it I thought it was more about creating meaning for brands from your intellectual properties.  Instead it was about partnering with Brands to have them in your TV show, or movies.  Things like product placements where you actor is drinking a coke, or driving a GM car in the movie Transformers.  It was interesting to hear about how much money can be made for adding in these products.  I think they were saying $100,000 for a product in a TV show, and millions of dollars for movies.

The last session I went to ended up being the one I got the most out of.  It is always interesting to hear about the $90 billion game industry.  It is such a rapidly growing industry, and there are so many different platforms for them. There are PC, console, mobile, tablet, and social/Facebook games.  You have the Pay-to-play, In-App purchases, free-to-play, and many other types of games.  Virtual reality is also an up and coming platform that I feel will continue to grow.  I wish this session was longer, because you could tell they were only scratching the surface.  I hope to reach out to some of the people on the panel to continue the conversations.

In addition to the sessions I also met a lot of really great people, and heard some very interesting stories.  The main reason I go to these conferences is to network, and create new relationships, and this year there was no shortage of that.  I will spend most of today reaching out to the people I met this weekend, and finding ways we can work together. 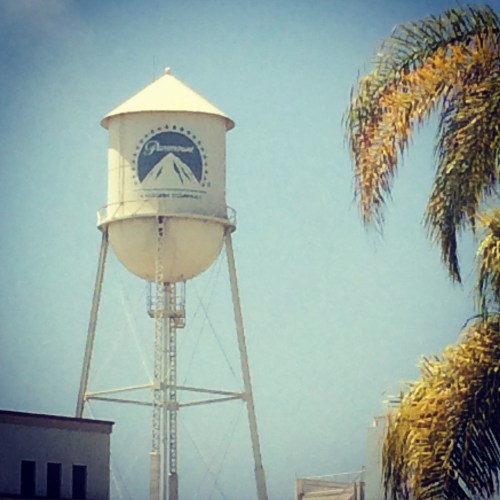